JR Sapporo Ekimae Redevelopment Building is planned on a scale of 420,000 m²

The Sapporo Station Exchange Center, North 5 West 1 and West 2 District Urban Redevelopment Preparatory Association (Chairman: Toru Yoshioka, Vice Mayor of Sapporo) is planning a redevelopment building on a scale of approximately 417,000 m² in the North 5 West 1 and West 2 blocks in front of JR Sapporo Station. There are two plans: plan A, which has a building with a maximum height of approximately 255 m, and plan B, which consists of two buildings of approximately 200 m and 150 m in height. Both of them would be the tallest buildings in Hokkaido, creating a new symbolic space at the gateway to Sapporo. 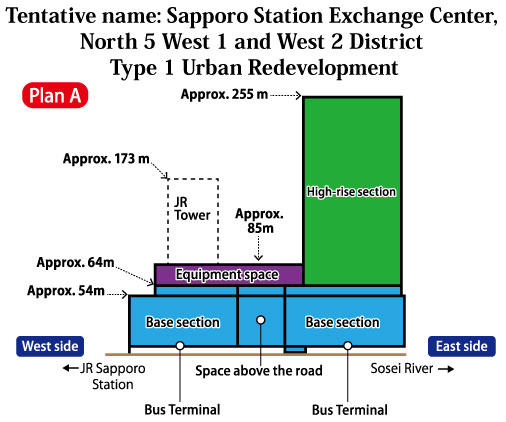 plan A, which has a building with a maximum height of approximately 255 m 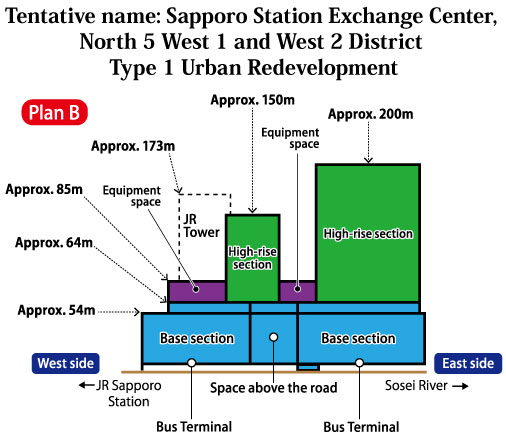 plan B, which consists of two buildings of approximately 200 m and 150 m in height

The basic plans will be summarized and then narrowed down in this coming fall. There is concern over the impact of COVID-19, but at present there are no plans to review the planned scale or schedule.

The preparatory association consists of the City of Sapporo, which owns the North 5 West 1 block and a JR Hokkaido group company that owns the Esta commercial building in the North 5 West 2 block. As a type 1 urban redevelopment, the association is planning an integrated redevelopment of both blocks (approx. 3 ha), which will be in front of the station when the Shinkansen line opens.

The construction of the redevelopment’s building(s) is expected to start in FY 2023, with the aim of completion in the fall of 2029, the year before the 2030 Winter Olympics/Paralympic Games, which Sapporo is engaged in a campaign to host. The association assumes the application of a special urban renewal area that enables large-scale building construction to realize a redevelopment building(s) with a floor area ratio of 1200 to 1500%.