In 2020, COVID-19 hit the world economy seriously. Development projects in Niseko, one of the best international resorts in Hokkaido, have also been greatly affected by the unprecedented “invisible enemy.” While the construction of accommodation facilities, which had already started before the spread of the virus, was still being completed, there were reviews of the opening dates and delays in the construction plans due to the suspension of work. On the other hand, large-scale development plans with an eye on life after COVID-19 have also emerged. We followed the current state of resort development. (Ryohei Tsukamoto, Otaru Branch)

Since October 2020, when the full-scale ski season was about to begin, the construction of a succession of hotels and inns has been completed in Niseko.

“Intuition” by Hong Kong-affiliated Zekkei Properties, “Raku Suisan” by Shin Nihonkai Ferry, “Higashiyama Niseko Village, a Ritz-Carlton Reserve” by Niseko Village, and “Sansui Niseko” by Hirafu Capital GK – all of these properties were completed after more than a year of construction, with work continuing under the influence of the COVID-19 pandemic. 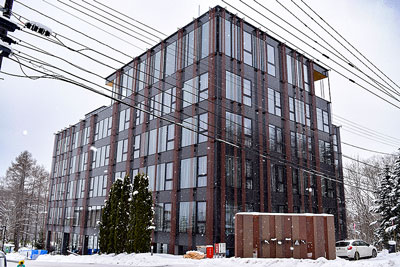 Intuition was completed at the end of November. Due to the spread of infection, it was decided to begin limited operation.

Hiroshi Kurokawa, Manager of the Division of Environmental Development and Project Development at Nakayama Construction, the company contracted to build Intuition, is relieved that the construction was completed within the set period without any persons involved, including workers, being infected with the virus. He said that while taking basic measures, he was careful not to set excessively strict rules. “It was important to continue reasonable efforts and raise each person’s awareness of prevention,” he recalled.

The construction was completed successfully, but the opening was limited. This winter, the operation as a hotel using rooms rented to guests when the owners were absent was suspended, and the use of the public hot-spring bath was also stopped from the viewpoint of preventing infection.

While the construction of attention-grabbing accommodation facilities is being completed, there are differences in management regarding the opening dates and content.

Raku Suisan fully opened on December 1 as scheduled based on the idea of providing an accommodation environment that avoids the three C’s (closed spaces, crowded places, and close-contact settings) and for the time being attracting customers only from Japan. The Ritz-Carlton brand’s Ritz Reserve also opened on December 15.

Sansui Niseko has deferred opening this winter. Although the delivery of the building has been completed, it was decided to postpone the start because the inbound recovery cannot be expected due to the spread of COVID-19. It is apparently considering opening in the summer or winter of 2021.

In October 2020, the Government of Japan resumed accepting inbound travelers who plan to stay for medium- to long-term periods from all over the world. However, the number of tourists entering Japan remains low. The outlook for recovery is uncertain, as the infection has spread again.

This winter, Niseko is very quiet with none of the foreign tourists who have enlivened the area in recent years. During a different “busy season” than usual, people involved are trying to find the optimal solution.