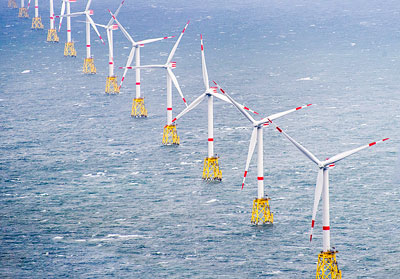 Offshore wind power generation in Germany. It is expected to be introduced in Hokkaido

In March 2020, the Hokkaido Government declared its aim to reduce greenhouse gas emissions to virtually zero by 2050. In October of the same year, Prime Minister Yoshihide Suga announced a policy to make Japan carbon neutral by 2050, causing the movement toward decarbonization to intensify. With the idea of maximizing the use of renewable energy toward decarbonization, the Hokkaido Government is reviewing the Hokkaido Energy Conservation and New Energy Promotion Action Plan, which sets specific energy-related measures and targets.

In the newly formulated third plan, the period has been set as FY 2021 to 2030. Toward the maximum utilization of new energy, the following have been positioned as challenging areas: (1) development of various types of local production for local consumption; (2) improvement of the business environment for the establishment of an energy base Hokkaido; and (3) promotion of environment-related industry integrated with energy conservation and the introduction of new energy.

Specifically, in addition to implementing environmental improvements for large-scale development and the introduction of new energy, such as offshore wind power, infrastructure development for the effective utilization of hydrogen and efforts to reach out to the national government for transmission infrastructure improvement, the plan also includes building a distributed energy system that takes advantage of regional characteristics.

Although the specific introduction target of renewable energy is under consideration, the draft plan states, “the highest level that can be expected to produce results by 2030,” and aims to significantly expand introduction. To achieve the goal, the Hokkaido Government will set such targets as the numbers of offshore wind power plants, new net zero energy buildings (ZEB), next-generation vehicles, EV charging stations, and hydrogen stations. The plan will be formulated within this fiscal year.

If you want to read this article in Japanese, you need to subscribe to a paid service.