Steel material prices are on the verge of entering unchartered territory. Against the backdrop of soaring raw materials prices, the prices of typical building materials, such as H-section steel and steel plates with a thickness of 3 mm or more, have risen across the board this year, approaching the high prices before the “Lehman shock” (2008 global financial crisis). As with the recent increase in lumber prices, supply has not caught up with growing demand in the United States and China, which is beginning to take a toll on Japan. It remains to be seen if the situation will lead to an “iron shock” and put even more pressure on the construction industry than ever before.

“I could hardly believe my ears when I heard about the price hike,” says Takeshi Abe, the president of Neo Trading Co., Ltd. (headquarters: Sapporo), a housing material trading company. In early July, he was informed by a business partner of a price increase in metal siding, which the company had been dealing with on a regular basis. It suddenly rose by 17% starting with the September contract. “We’ve had price increases of a few percent in the past, but I’ve never heard of a double-digit markup of nearly 20%,” he says.

The prices of many steel products are now rising. Major steel companies have intermittently announced price revisions. Since last year, Nippon Steel Corporation—Japan’s largest steel manufacturer—has been raising the prices of most products supplied by the group, including steel plates, shaped steel, and steel pipes. The same goes for Japan’s second largest steel manufacturer, JFE Holdings, Inc., and other groups.

The prices have gone up 10,000 yen or more per ton in most cases, which is an increase of 10 to 20% depending on the product. Combined with gradual increases in the future, the prices of some products will increase by a total of 50,000 to 60,000 yen in less than a year.

Hokuchokin Nichibei Kenzai (headquarters: Sapporo), a roofing material trading company and fabricator of the JFE Group, is currently busy explaining the situation to its business partners, such as sheet metal companies. The material supplier has announced several price hikes this year. Hideki Kanazawa, manager of the product sales department, says, “Up until now, price hikes have only occurred once a year or so, and continuous rises in prices were extremely unusual. The total increase is around 60,000 yen per ton, and we can’t offset that through self-help efforts. We therefore have no choice but to explain it carefully to our business partners and try to gain their understanding.”

However, not all business partners are understanding. According to another steel material trading company executive, “When we talk about the need to pass on prices, we are sometimes sternly asked to negotiate further with the manufacturer.”

Manufacturers cite a sharp increase in the price of iron ore, the raw material used to produce steel with blast furnaces, as one reason for the price hike. Japan relies 100% on imports, and there is no scenario in which domestic materials like lumber can be used. The international trade price announced by the World Bank stagnated at a level of around 80 dollars per ton in the spring of last year, when COVID-19 began to spread around the world, but has been rising since the summer, when China resumed economic activities ahead of other countries. It exceeded 200 dollars in May for the first time, and reached an unprecedented high of 214 dollars in June. 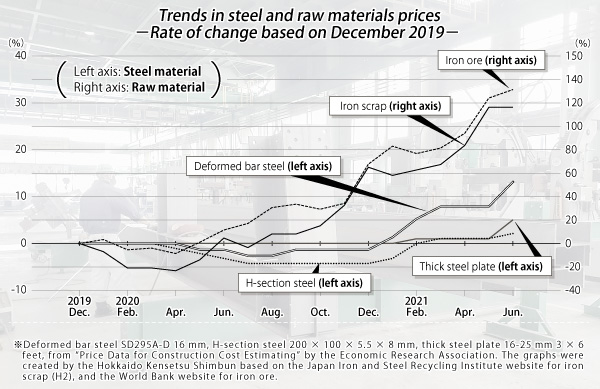 Unlike iron ore, iron scraps are abundant in Japan. Although it seems unlikely that the balance between supply and demand will be drastically disrupted, transaction prices are actually rising. According to the Japan Iron and Steel Recycling Institute, the price of iron scraps in Hokkaido in June was in the 46,000 yen per ton range, which is more than double that of a year ago.

Another reason for this hike is the strength of overseas demand in China and elsewhere. Recyclers choose exporting over domestic distribution because iron scraps sell for higher prices overseas. According to the Kanto Tetsugen Cooperative Association, which handles scrap exports jointly by multiple companies, the export price has exceeded domestic and Kanto market prices for 20 consecutive months since November 2019.

In this way, the raw material market entered an upward trend in the first half of last year, and after a time lag of about half a year, the impact on building materials became clear this spring. Looking at material prices in Sapporo in the “Price Data for Construction Cost Estimating” published by the Economic Research Association, the price of H-section steel had been stalled at 90,000 yen per ton since last summer due to a decrease in demand amid the COVID-19 pandemic, but has risen this year. The price reached 96,000 yen in June, exceeding the level prior to the COVID-19 pandemic, and is now approaching the 100,000-yen level of 2008. The price of deformed bar steel used for reinforcing bars of reinforced-concrete structures began to climb at the end of last year and reached 86,000 yen in June, more than 10,000 yen higher than the price in the same month of the previous year.

So what does the future hold now that prices for steel materials are soaring? The president of a sheet metal company in Sapporo points out, “It’s difficult to understand because manufacturers show the price per ton, but for sheet metal companies like ourselves and builders, it means that the cost per square meter of construction increases by hundreds of yen.” For public works, there are certain measures that can be implemented to increase budgets in response to changes in market conditions, but this is not the case for single-family homes and other private buildings. The president says, “If this continues, many small and self-employed businesses will suspend operations or close down due to insufficient profits, accelerating the labor shortage in the industry. This is more serious than the ‘wood shock.’”

A great amount of steel materials are used for large buildings, such as condominiums and commercial buildings, and rising steel costs affect construction plans themselves.

“We may have no choice but to raise the sales price, but there is an upper limit to the price range at which many people will buy,” says the president of a leading condominium developer in Sapporo. He also says, “If the price of materials continues to rise at this rate, we must consider slowing the supply pace from our original plan.”

A steel frame fabricator says, “There is no way it will continue to rise. It will be adjusted somewhere along the line.” Meanwhile, a person from a specialized trading company says, “I can’t see any reason for the price to go down.” There are various views in the industry regarding the future of the steel material market. As with lumber, the global supply and demand situation will be the key to forecasting.

The trends in the manufacturing industry affect the supply and demand of steel materials more than construction. The Manufacturing Purchasing Managers’ Index (PMI) for June released by the National Bureau of Statistics of China on July 1 was 50.9, remaining above 50 for 16 consecutive months and thereby suggesting economic expansion. Demand in the United States, where vaccination against COVID-19 is widespread, is also strong. The ISM Report on Business – Manufacturing for June was 60.6, well above 50, which is considered the turning point of the economy. In addition to this, President Biden has proposed a $2 trillion (about 220 trillion yen) infrastructure investment plan for the next eight years, and is moving forward towards legislative passage. If realized, it will result in massive steel demand in the United States.

Is it possible to think ahead and take action while keeping an eye on world trends? This is the question being posed to the construction industry in Hokkaido as signs of an impending “iron shock” emerge.