Kutchan Town is the core of Niseko, the driving force behind tourism in Hokkaido. A succession of large-scale construction projects have emerged in the resort area even after the spread of COVID-19, and it is widely believed that development pressure will remain high for the time being. Meanwhile, new hot-spring drilling will be restricted in the central area, and discussions on tightening building regulations in the region are in full swing. Stakeholders in and outside the town have mixed opinions, with some voicing opposition and other expressing empathy or expectations for expanding business opportunities under the new rules. (Reporter: Ryohei Tsukamoto, Otaru Branch)

■ Desire for development is still strong

In 2020, when inbound tourism was not expected due to the COVID-19 pandemic, the new construction of accommodation facilities in the town slowed down. According to a survey by the destination management organization Niseko Promotion Board (NPB), there were 17 applications for building permission in Kutchan Town in the year. The number fell sharply compared to 33 in 2019 and 53 in 2018.

However, the desire to develop accommodation facilities and villas to open in the next few years is not inferior to the recent past. 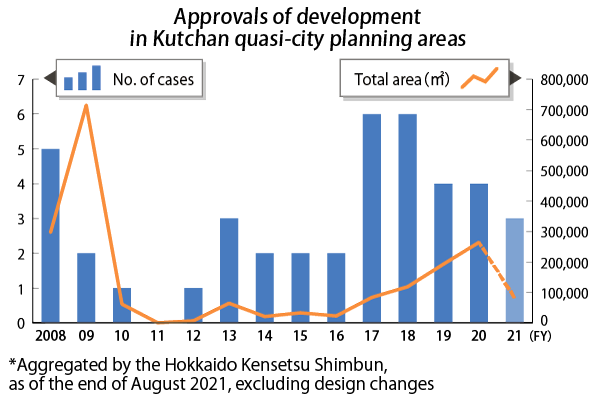 In the quasi-city planning area which was designated by the town in March 2008 and covers the resort districts, there were four permits for development activities in FY 2020 (3,000 m2 or more excluding design changes), covering a total area of 264,450 m2. Although the number of approvals decreased slightly from the highs of FY 2017 and FY 2018, the total area was the third largest ever and the largest in the last 10 years.

In FY 2021, there were three approvals, covering a total area of 80,690 m2 in the five months until the end of August. It is strongly believed that high development pressure will be maintained for the time being. Based on the extension of the Shinkansen and the development of high-standard highways, a member of the town council says, “I think the next five years will be the peak of development activities.”

Although investors are enthusiastic about the development of the area even amid the COVID-19 pandemic, new hot-spring drilling will be restricted from September 2021 in the Hirafu District, the center of the resort area.

In recent years, hot-spring drilling has accelerated in the district. The number of drilling permits, which was about one or two per year until 2014, increased to 10 in 2019, and signs of resource decline, such as a drop in the source water level, were confirmed.

For this reason, the Hokkaido Government, which decides on drilling permits, revised the hot-spring protection guidelines last fiscal year. The Center Village District was set as a protected area where new drilling is not permitted, and a part of the surrounding Yamada and Kabayama districts as a quasi-protected area where new drilling is permitted if the site is at least 250 m away from the existing spring sources. These rules will come into effect on September 15, and will be applied to new applications for drilling permits.

A person in charge at the Hokkaido Bank, Ltd. Niseko Subbranch who is familiar with the investment situation in Niseko, says, “The value of the Hirafu District will not drop sharply due to drilling restrictions. However, there is a possibility that the evaluation of other districts where drilling is possible will rise relatively.”

The new building regulatory rules that the town is considering may significantly change how development is done.

The town plans to expand the quasi-city planning area and divide it into four areas, and to set the three districts of Center Village, Hanazono Village, and Niseko Weiss Ski Area as base areas where middle- and high-rise accommodation facilities and stores are concentrated. Meanwhile, for the conservation areas where many undeveloped areas remain in the Yamada District, the Kabayama District and the Iwaobetsu–Asahi–Hanazono District, the town plans to regulate the building coverage ratio and floor area ratio, set a greening ratio, and set an upper limit on the total floor area of the accommodation facilities to curb large-scale development.

The reactions of those involved in tourism and development vary. At the August gathering of the Landscape District Subcommittee of the Landscape Planning Review Meeting that discusses rule-making, NPB’s Representative Director Ross Findlay, a member of the committee, expressed a sense of crisis, saying, “If regulations are too strict, it will be difficult to move forward as a resort.”

On the other hand, Sylvia Tang, a co-owner of Hong Kong-based Apex Property, which plans to develop a large-scale chalet area referred to as Hanacreek in an assumed conservation area, shows an understanding of the tightening of regulations, and stresses her respect for the policy of forest protection. Although the project involves the construction of a clubhouse including accommodation facilities, she says that they are “ready to change some of the design” in line with the new rules.

Some people see the “fluctuations” that are expected due to the tightening of regulations as business opportunities. A representative of a construction company in Sapporo, which has a track record of building villas for overseas visitors in Niseko, looks forward to expanding business opportunities by making use of its know-how, saying, “If it becomes difficult to build a large hotel, the development style of luxury detached villas may spread.”

The new rules are scheduled to come into effect as early as the summer of 2022, and expected to be applied to properties that have not started construction at the time of enforcement.