Background of strong real demand in the United States and China.

“Although I have experienced the rise and fall of material prices many times, this is the first time I have witnessed a situation like this.” The president of a housing builder in Sapporo is baffled by uncertainty about the future of the wood shock. Japan relies on imports for more than 60% of its lumber consumption. Supply sources are wide-ranging, including China, EU nations, and countries in Southeast Asia and North America, and lumber prices have been influenced by overseas trends. Now, let’s examine various data to see what is happening around the world.

High housing demand in the United States is most often pointed out as the main reason for the sharp rise in lumber prices. According to the United States Bureau of the Census, housing starts have consistently increased since they bottomed out in 2009, shortly after the “Lehman shock” (2008 global financial crisis). In 2020, housing starts increased by 7% from the previous year to 1.38 million, recovering to the level they were at just before the global financial crisis. In addition to low mortgage rates, the spread of telecommuting due to the COVID-19 pandemic is generally considered to be impacting this trend. Even since 2021, housing starts have remained above pre-pandemic levels, and signs of a decline in demand remain to be seen.

The price of lumber futures in the United States began to rise around June 2019. Although it fell in the spring of last year when it became obvious we were in a full-fledged pandemic, it soon returned to an upward trend, and the transaction price per 2.36 m3 in the US Nasdaq Stock Market temporarily reached $1,670.5 in May, which was more than four times the price in the same month of the previous year. Although the price was at the $1,100 level as of June 11, it remains at an extremely high level.

The impact has spread across the globe. According to a UK government-affiliated research institute, the price index for conifer logs was 15.4% higher in March than in the same month of the previous year. A person in charge at the European Forest Institute in Finland commented, “Much of Europe’s lumber is being exported to the United States and other countries, causing lumber shortages and high prices in Europe.”

Another major factor is economic development in China. Although figures for new housing starts in 2020 (based on floor area) released by the National Bureau of Statistics of China decreased by 1.2% from the previous year, they increased significantly by 12.8% between January and April of this year. As in the United States, this shows a rise in domestic demand. 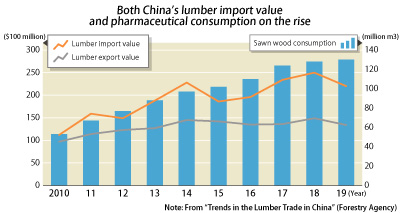 While China is one of Japan’s largest import sources for lumber, Chinese lumber is now being used to meet growing domestic demand. According to data from the Forestry Agency of Japan, China’s annual lumber consumption has increased by 2.5 times, and production and imports have more than doubled between 2010 and 2019. On the other hand, the value of exports has remained almost unchanged. Recently, due to the deterioration of the relationship with Australia—a supplier—and Russia’s log embargo, China will be forced to procure 13 million-m3 of logs annually from other regions.

The rise in shipping costs by sea has also been pointed out as one of the causes. According to the Japan Maritime Center (Headquarters: Tokyo), the containership freight rate from Europe or the United States to Yokohama has skyrocketed since around November 2008 and remains high to this day. Analysis conducted by the Center and the Forestry Agency shows that the container backlog in North America is the result of an increase in US imports and a decline in port processing capacity due to the COVID-19 pandemic, and that container shortages continue in Asia. “For the time being, fares are not going down to the levels seen before last year,” said Hiromasa Goto, a researcher at the Center.

The wood shock, which was triggered by real demand from the United States and China—both of which are major world powers, caused confusion in the housing construction and lumber industries in Hokkaido. It is becoming more and more important to steer business management with an eye on medium- to long-term international trends.

(This series was written by Takahiro Miyazaki and Riku Takada of the Economy and Industry Division and Miho Abe of the Obihiro Branch Office.)