A “second Niseko” adjacent to Kitanomine 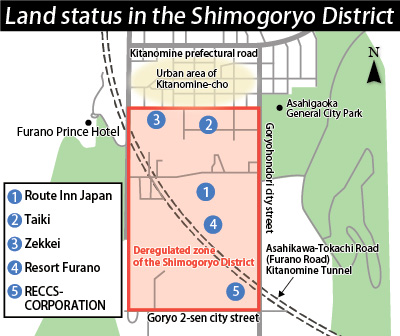 At Furano’s Kitanomine, which is attracting attention as the “second Niseko,” a wave of large-scale development is spreading not only in the urban area but also to the adjacent Shimogoryo district. Land preparation and sales are becoming active, and new construction projects such as a Route Inn hotel and foreign-funded condominiums have been planned. The momentum to embark on construction work after the COVID-19 pandemic is over is increasing, and people involved in and outside the city are watching the trend. (Reporter: Yuta Chiba, Asahikawa Branch)

■Deregulation in hotel and resort development

In the residential area of Kitanomine-cho, the land price has risen for the fifth consecutive year against the backdrop of the popularity of ski resorts that are highly evaluated in Japan and elsewhere for their snow quality and convenience. The land price per square meter was 18,200 yen in 2017, but it has increased to 25,600 yen in 2021. Land acquisition and new condominium construction by developers and investors have been continuing.

The excitement seen in the Kitanomine District has spread to the Shimogoryo District on the south side. Shimogoryo is a district where regulations on large-scale development were relaxed in FY 2017 due to changes in the city’s urban planning. The zone (an area of about 45㏊) where development demand is expected has been designated as a “resort industrial area,” and it has become possible to develop hotels and resorts on the condition of harmony with the natural environment.

Route Inn Japan is planning to build a new 212-room hotel called Grandvrio Resort Furano in the Shimogoryo District. The construction site covers an area of 3.5㏊including the area of 1997-1, Furano ((1) in the figure). Route Inn Japan aims to open the hotel in May 2023, and it is expected that a resident briefing session will be held in 2022. Development activity has not started yet.

Taiki, a Chinese company headquartered in Sapporo, has completed the development activity of the 4.7-ha site including the area of 1985-1, Furano ((2) in the figure). Two years have passed since the development was completed, but the construction of the planned buildings has not yet started. Currently, a construction consultant involved in development is consulting with the city government to construct several condominium buildings.

In the area adjacent to the west side of the land developed by Taiki, Sapporo-based Zekkei Group owns a 1-ha site including 2153-4, Kitanomine-cho ((3) in the figure).

The company is a Hong Kong-affiliated firm that is also working on development in Niseko, and has entered Kitanomine with the Fenix Project, a three-building condominium development, as a foothold. The second building is under construction, and the construction of the third building is scheduled to start in 2022 at 2141-4, Kitanomine-cho.

The company is apparently considering development projects centered on new condominium construction on land in the Shimogoryo District.

In 2017, a Thai company received development permission for a 5-ha site ((4) in the figure) including Shirikishimanai 2000-1, Furano, which is adjacent to the south side of the Route Inn hotel site, but it fell through. After that, the land was bought and sold several times, and in February 2021, the ownership was transferred to Resort Furano, which is headquartered in Sapporo.

RECCS-CORPORATION, which operates a real estate business in Sapporo, owns a 2.4-ha site including Shirikishimanai 2008-8, Furano ((5) in the figure). If there is a good proposal, the company intends to consider selling or renting it.

A developer who owns land in the Shimogoryo area says, “We have the land, but development depends on the situation of the COVID-19 pandemic. There are many projects that are stagnant around here, but once the pandemic is over, they will start to move.”

Meanwhile, Furano City is wary of expanding development beyond the Shimogoryo District. Yutaka Ono, director of the city’s Construction and Water Services Department, calmly says, “We welcome development in line with city development and planning, but we must avoid the expansion of disorderly development. Mutual cooperation and trust are important.”

Kiyomi Ishihira, the head of the Furano Ryokan Business Association, expects to build a good relationship with new entrants, saying, “The development of new hotels is expected to create new shares, attract related companies, and promote employment and local consumption. However, if foreign capital further enters the market, trouble due to differences in lifestyle may occur, so it is necessary to share the rules.”

In Kitanomine, the resort area is closer to the residential area than in Niseko. Development that can bring benefits to the local economy and natural landscape without leaving any burden or conflict is desired.