Well Smart Group (Ruize Jia, Director), a Singaporean real estate investment and development company, plans to develop a large-scale accommodation facility in the Iwaobetsu district of Kutchan Town. The plan includes the construction of 50 luxury villas and one hotel on a 20 ha-site. The company hopes to begin construction in 2023. A series of large-scale development projects have emerged in the surrounding area, showing that there is a huge appetite for investment, especially among China-based foreign investors, even amid the sharp decline in inbound tourism due to the COVID-19 pandemic. 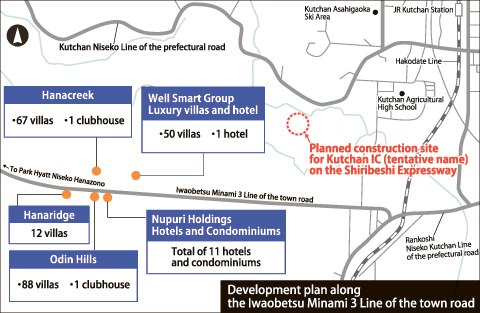 The planned development site is 228-1 Iwaobetsu, approximately 2 km east of the Niseko Hanazono Ski Area. Its subsidiary, established in Japan in August 2021, has acquired the 20-ha site from domestic and foreign landowners since January of this year.
The structure, number of floors, and total floor area of the villas and hotel have not yet been determined, as the master plan is still being prepared. According to Jack Jia, director in charge of development, each villa will have four bedrooms and a spa. He is enthusiastic about the project, saying, “It will be one of the most exclusive villa developments in Niseko.”

The hotel will be a small-scale facility based on Zaborin, a high-class Japanese-style inn located in the Hanazono district. This seems to be because the site falls under a conservation area subject to new rules for specific use restricted areas that will be enforced by Kutchan Town and include limits on the total floor area of hotels and inns.

The company hopes to start the first phase of construction in 2023, including land preparation and the construction of about three villas. From 2024 onward, plans are slated for five to 10 buildings to be built each year. The entire project is expected to be completed around 2028.

This is the company’s first real estate development project in Japan. It owns a resort hotel at Airlie Beach, a tourist destination in Australia, and plans to build several luxury hotels both there and in New Zealand.

Successive Developments May Affect the Landscape

The Hanazono area of Kutchan Town has been attracting attention as an investment destination for resort development. In particular, construction plans are concentrated along the Iwaobetsu Minami 3 Line of the town road. There are already at least five plans for construction between the intersection of the Rankoshi Niseko Kutchan Line of the prefectural road and Park Hyatt Niseko Hanazono. If all goes well, the number of villas alone will exceed 200, but the successive construction projects may cause landscape and traffic problems.

Hanaridge, consisting of 12 villas, is the only project for which construction is currently under way. On the adjacent 13-ha site to the east, Hong Kong-affiliate Odin plans to build 88 villas and one clubhouse. On the 2-ha site further east, Hong Kong-based Nupuri Holdings intends to build 11 new accommodation facilities, including two hotels and three condominiums.

Across the town road, Hanacreek is envisioned as 67 villas and one clubhouse. The site to be developed by Well Smart Group is adjacent to the east side of the property.

Satoshi Yoshida, president of the Kutchan Tourism Association, cites a glut of foreign capital, still undervalued land prices in the Hanazono area, and the growing popularity of skiing in China as reasons for the continued investment fever. He says, “The number of skiers is expected to reach 300 million after the Beijing Olympics, and in anticipation of that, investment is continuing.” Ben Kerr, managing director of Niseko Real Estate, analyzes that not only hotels and condominiums but also detached villas for long-stay foreign visitors are expanding their presence as investment properties.

It is unclear, however, whether these projects will proceed smoothly as it is common in Niseko for construction to be delayed due to the difficulty of negotiating directly with wealthy foreign individuals amid the COVID-19 pandemic. Even if all the projects begin as planned, construction will be concentrated in 2023. President Yoshida says, “There is concern about the impact on the landscape. Considerable care must also be taken to ensure the safety of construction vehicles.” (Reporter: Ryohei Tsukamoto, Otaru Branch)

If you want to read this article in Japanese, you need to subscribe to a paid service.