The Lake Mashu Environmental Conservation Liaison Council, which consists of five towns neighboring Lake Mashu, the Government of Japan, the Hokkaido Government, and research institutes, conducted a monitoring survey of the Lake Mashu’s water on August 25 and 26. This crowdfunded initiative that reaches across administrative boundaries was intended to protect the lake’s high transparency and mysteriousness. I accompanied the survey team. (Reporter: Ikumi Miura, Kushiro Branch Office) 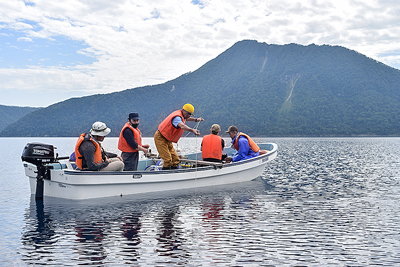 Transparency and other indicators were measured

Lake Mashu in Akan-Mashu National Park is a caldera lake with a maximum depth of approximately 212 m, and it recorded the world’s highest water transparency of 41.6 m in 1931. In 1981, the National Institute for Environmental Studies began surveying the lake, which was registered in 1994 as Japan’s only lake observation point in the United Nations Environment Programme’s Global Environmental Monitoring System for Freshwater (GEMS/Water).

After the completion of the national survey in FY 2018, the council was established by five neighboring towns, including Teshikaga Town and Shibecha Town, as well as the Ministry of the Environment, the National Institute for Environmental Studies, the Hokkaido Research Organization and other related organizations. The council has been collecting cooperation funds through crowdfunding since FY 2019 to continue monitoring.

It takes 30 to 40 minutes on foot to the survey site. Walking through rough terrain,, we went down a steep slope along a stream. Focusing on my feet as I walked, an unexpected fallen tree blocked my way. In some narrow places, the width of the road was only about one foot. I stumbled and pushed through bamboo grass as tall as I am until I found the shining blue lake surface. Lake Mashu is often shrouded in mist, but it was sunny and the wind was calm. The surface of the lake reflected the scenery like a mirror.

For measurement at the maximum water depth, we moved by boat to the observation point in the center of the lake. The tethered water quality measuring instrument was slowly lowered from the boat to the bottom of the lake, and the water temperature from the surface layer to the bottom of the lake, dissolved oxygen, chlorophyll and turbidity were measured. The instruments used in the water quality survey are heavy because they must sink without fail. It takes patience to lower and raise them.

Transparency was measured using a tethered transparency disk with a diameter of 30 cm, by lowering it from the boat to a depth where the white disk can be seen with the naked eye. Although it is easily affected by weather because it is measured with the naked eye, the conditions on the day were favorable. The transparency was 21.1 m. Lake Mashu, which is in an isolated environment with no inflows and outflows of rivers, continues to be influenced mainly by the atmosphere. Examining water quality provides clues about the global warming and atmospheric environment.

After completing all the survey, we entered the forest road again. We followed a meandering route on a steep slope. I climbed the slope as if I were a train on a switchback railroad, but I was not able to see the goal easily. I managed to climb up while clinging to the bamboo grass.